Zoonoses: Infectious Diseases Transmissible from Animals to Humans 4th Edition, Zoonoses are a persistent threat to the global human health. 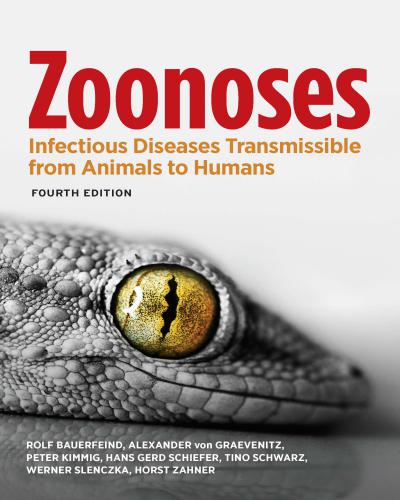 Zoonoses are infectious diseases transmissible from vertebrate animals to humans and vice versa under natural conditions. They comprise a complex spectrum of diseases due to the diversity of pathogenic agents involved. They may confront veterinarians as well as general practitioners, pediatricians, infectious disease specialists, and microbiologists with special diagnostic and therapeutic problems. While we did not intend to write a handbook of zoonoses, we wanted to cover not only well-known diseases but also rare ones that may be of importance to physicians active in developing countries and to travelers going to distant or rarely visited areas.

Today, more than 200 diseases occurring in humans and animals are known to be mutually transmitted. Classical infectious diseases, such as rabies, plague, and yellow fever, have not been eradicated despite major efforts.

New zoonotic diseases are on the increase due global conditions such as overpopulation, wars, and food scarcity, which facilitate human contact with rodents, stray animals, and their parasites. In addition, humans are unwittingly becoming accidental hosts and new links in an infectious chain by engaging in activities such as survival training, which involves camping in open areas and consumption of raw or insufficiently cooked food.

Zoonotic infections cause a variety of symptoms that often do not provide clear evidence of a known disease. Zoonoses, Fourth Edition, describes most occurring worldwide zoonosis and facilitates the identification, diagnosis and treatment of zoonotic infections.

Written by a team of doctors, medical microbiologists and veterinarians, this completely, revised edition covers all aspects of the epidemiology and prevention of zoonotic diseases through clear descriptions of various illnesses. Specifically, this fourth edition covers zoonosis caused by
viruses, bacteria, fungi and parasites infections caused by animal bites infections and intoxication by animal foods Iatrogenic transmission of zoonotic pathogens. Zoonoses is an indispensable reference for clinicians and laboratorians.