Sisson and Grossman’s The Anatomy of the Domestic Animals, Volume I, 5th Edition

Sisson and Grossman’s The Anatomy of the Domestic Animals, Volume I, 5th Edition 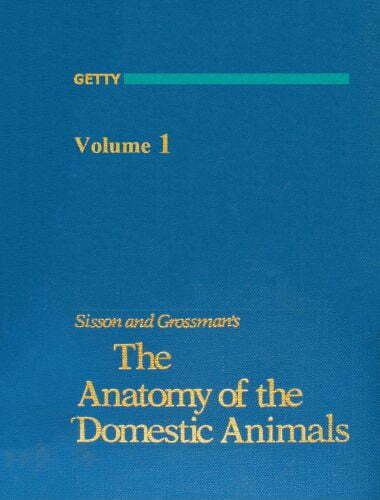 Anatomy is not a dead subject It is a living part of constant scientific re­search. It is also the foundation for all biological knowledge. This revised edition of Sisson and Grossman’s Anatomy of the Domestic Animals was spearheaded by the late Dr. Robert Getty who passed away on February 18, 1971. At the time of his death, most of the text was finished and 99 per cent of the illustrations were complete. Veterinary Anatomy, The Regional Gross Anatomy of Domestic Animals

Dr. Robert Getty·, while revising this text, served as Chairman of the Section on “Organa Sensuum” of the International Committee on Veterinary Anatomical Nomenclature of the World Association of Veterinary Anatomists. Through this committee a defined, authoritative anatomical nomenclature was formulated and published. Their efforts have been incorporated in this text.

The Fifth Edition of the text presents a new format, in which each species is considered as a separate entity. The first four editions considered the horse as the basic animal and described the other species in a comparative manner. In this edition the material-both illustrative and textual-for the other species has been greatly expanded. The new format was introduced so that the text would be more useful to students around the world. In this format the student can concentrate on a specific species, since all of its systems are included in one .section.

It was one of Dr. Getty’s basic tenets that if we are to know physiologic and pathologic changes we must know the normal. This philosophy 􀁵s relayed to the student and reinforces the fact that “Anatomy” is a living subject A revision of this magnitude cannot be accomplished by one person alone. Graduate students of Dr. Getty, through their theses, contributed to this revision as did many renowned anatomists the world over.

Miss Cynthia R. Ellenport, Dr. Daniel J. Hillmann and Dr. Nani G. Ghosbal contributed greatly to the text and completed the revision after Dr. Getty’s death. Dedicated to Dr. Robert Getty, and to the many others who have contributed to the knowledge of the anatomy of domestic animals, and consequently, to man’s welfare, this revised edition is further evidence of a scientific standard of ex­cellence.

Tags: Sisson and Grossman's The Anatomy of the Domestic Animals