Wildlife and Infectious Animal Diseases: The Proceedings of a Nordic -Baltic seminar on the role of the wildlife as reservoir and /or spread of infectious animal diseases in the coastal areas of count. 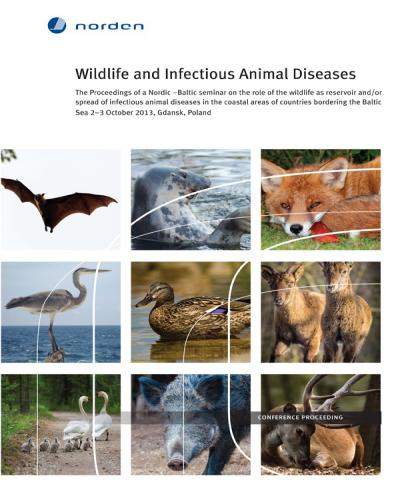 Many infectious diseases of domestic animals and humans have reservoirs in wild animals. One of these diseases is rabies which worldwide causes more than 55.000 deaths pr. year. Climatic changes, human population growth, certain livestock production systems and continued globalization enhance the interface between wildlife, domestic animals and man. The wildlife component of this triad has received inadequate attention in the past to effectively protect man, livestock, poultry and pet animals. The seminar held in Gdansk, Poland 2 – 3 October 2013 highlighted how the wildlife has high economic, ecological, social and cultural value for the coastal areas bordering the Baltic Sea and how it contributes to recreation. Nevertheless, the wildlife plays also an important role in the spread of infectious diseases and thereby the need for focus on disease surveillance and control measures.

The long-standing conflict between livestock owners and animal health authorities on the one hand, and wildlife conservationists on the other, is largely based on differing attitudes to controlling diseases of livestock which are associated with wildlife. The authors have attempted to highlight the fact that these disease problems are frequently bi-directional at the wildlife/livestock interface. The different categories of diseases involved are presented. A new dimension being faced by veterinary regulatory authorities is the spectre of emerging sylvatic foci of diseases, such as bovine tuberculosis, bovine brucellosis and possibly rinderpest; these diseases threaten to undermine national and international eradication schemes, which have been implemented and executed with significant success, and at great cost.

Conversely, wildlife-based ecotourism world-wide has expanded rapidly over the past decade and is the source of lacking foreign revenue for many developing countries. Traditional subsistence farming is still the largest source of much-needed protein on some continents and this, together with the growth and hunger of historically disadvantaged communities for land, is forcing enterprises and communities with markedly different objectives and land-use practices to operate effectively in close proximity. Some land-users rely exclusively on wildlife, others on livestock and/or agronomy, while yet others need to combine these activities. The net result may be an expansion or intensification of the interface between wildlife and domestic livestock, which will require innovative control strategies that permit differing types of wildlife/livestock interaction, and that do not threaten the land-use options of neighbours, or the ability of a country to market animals and animal products profitably.