By Scott A Weinstein, David A. Warrell, Daniel E. Keyler 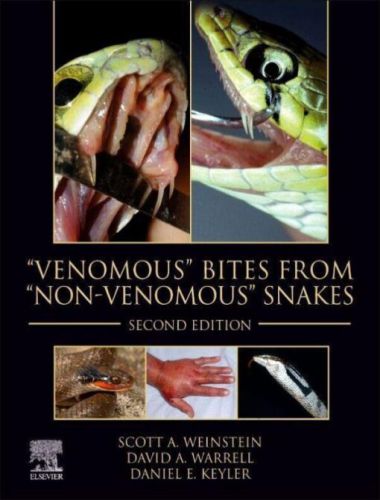 “Venomous” Bites from “Non-Venomous” Snakes, Second Edition thoroughly examines the potential hazards associated with bites by non-front-fanged snakes (popularly, but inaccurately, called “rear-fanged snakes”). This diverse group contains approximately 80% of living snake species (approximately 2,900 species). A large proportion of these snakes were previously assigned to the family Colubridae but, as a consequence of expanding systematics investigations, have been split into multiple families and subfamilies.

Many of these snakes produce venoms or oral secretions that contain toxins and other biologically active substances. A large variety of non–front-fanged snakes figure in the pet industry, yet little documented information or formal study of their potential medical importance has been published. Therefore, although the possible medical importance of many of these species has been subjected to speculation since the mid-19th century, there is a limited amount of useful descriptive information regarding the real hazard (or lack thereof) of this wide variety of snakes.

The first edition of this book provided “one-stop shopping” by offering information regarding their possible toxicity and clinical relevance as well as recommendations for medical management of their bites. The second edition expands and updates the content with detailed information about the effects and medical management of bites by a broad representation of non–front-fanged species. The hypothetical venomous nature of some lizards considered as non-venomous such as the Komodo monitor or dragon and their allies, as well as the medical effects of their bites, is also examined. The dynamic taxonomy of advanced snakes is updated, and the bases for some of these fluid changes are discussed. Likewise, terminology is also updated in order to reflect the ongoing debates regarding the definition of “venom” and the balanced reinforcement of nonmedical criteria used to define the biological basis of the term “venomous.”

The Commodification of Farm Animals