Tuberculosis in Animals: An African Perspective

Tuberculosis in Animals: An African Perspective,This book recounts the biology of M. bovis, followed by the status of bovine Tuberculosis (bTB) in African countries, primarily based on zoonotic and epidemiological field reports.

Tuberculosis in Animals: An African Perspective 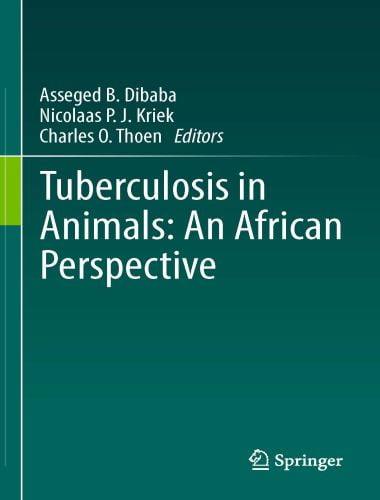 Since the accumulation of data is valueless unless it led to practicable control measures, emphasis is put on locally adapted protocols for future control of the disease. In order to systematically evaluate the knowledge base of bTB, Epidemiologic Problem Oriented Approach (EPOA) methodology was used. The methodology is composed of two triads: i) the problem identification/characterization triad, which is mainly descriptive in nature, and ii) the problem management/solution/mitigation triad, which is mainly geared toward problem management/solution (see figure). The first triad comprises three pillars: i) agent ii) host, and iii) environment and the second one: i) therapeutics/treatment, ii) prevention/control, and iii) health maintenance/promotion.

The two triads are linked together by the diagnostic procedure linkage. The systematic and detailed studies of the ‘Host-Agent-Environment’ interactions are the building blocks to the understanding of agent transmission pathways and disease spread.

These may include data about the disease status of the country, the nature of the disease agent and its hosts, the modes of transmission, the wildlife reservoirs in nature, persistence of infection, and agent survival in animal products and the environment. The problem identification and characterization triad identifies these interactions.

Once a problem has been identified and well understood, the next step is to minimize the risk of transmission and spread of a disease. This area, referred to as problem solution/management triad, consists of problem management alternatives that rely upon prevention/control, and health maintenance/promotion of the disease in livestock, wildlife, and humans with the emphasis on resource-poor, developing countries in Africa.