Parasitic Nematodes: Molecular Biology, Biochemistry and Immunology, Currently more than one third of the world’s population are infected with parasitic nematodes, and infection of domestic animals and crop plants remains a substantial drain on human well being and economies. 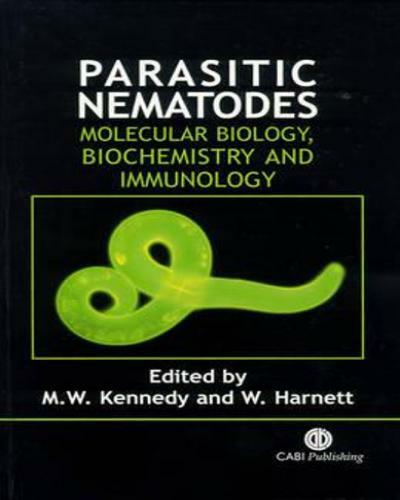 Dramatic advances are being made in the study of parasitic nematodes, progress made possible by the wealth of new molecular biological, biochemical and immunological tools which have recently become available. This exciting situation has been accelerated by the genetic and biological information gleaned from work on the free-living nematode, Caenorhabditis elegans, and there is increasing evidence of scientists working on this worm and parasitic nematodes in parallel.

It is also becoming clear that animal and plant parasitologists may have much to learn from one other, particularly now that the mechanisms whereby both classes of parasite control their tissue environments and the defence reactions of their hosts are receiving particular attention. It remains to be seen whether animal- and plant-parasitic nematodes use similar mechanisms, but there is clearly a possibility that they do, and new information on, for example, lipid signalling in plants and animals may be pertinent. Animal and plant hosts may still seem to be worlds apart, but it was not long ago that the importance of C. elegans to parasitologists of any persuasion was often dismissed.

There are so many scientists of high calibre in nematode parasitology that we found it extremely difficult to choose, but in order to produce a balanced approach we were unable to call on all of the authors whom we would otherwise wished to have included. If this book appears in another edition, however, then we may be able to recruit from amongst the authors who were not included on this occasion.